It is safe to say Latin America is the world’s headquarters for street food. Each day, avenues fill with street vendors that faithfully show up every morning to sell their goods. Street food is a staple in many Latin American countries, and it can be one of the most authentic experiences when discovering the Latin American culture during your Spanish classes in Latin America. We have tested and tried a lot of street food to bring you our top picks for Latin American bites: check out the best Latin American Streetfood and snacks.

Are you learning Spanish in Cusco? Keep on reading, you’ll love most of the folowing tips.

Anticuchos are very famous in places such as Cusco, Peru. Anticuchos are cow hearts cooked with vinegar, garlic, cumin, salt, pepper, oregano, and chilli pepper. You can buy them on the streets of Cusco for US$ 1,50. Or, treat yourself to a higher class restaurant. 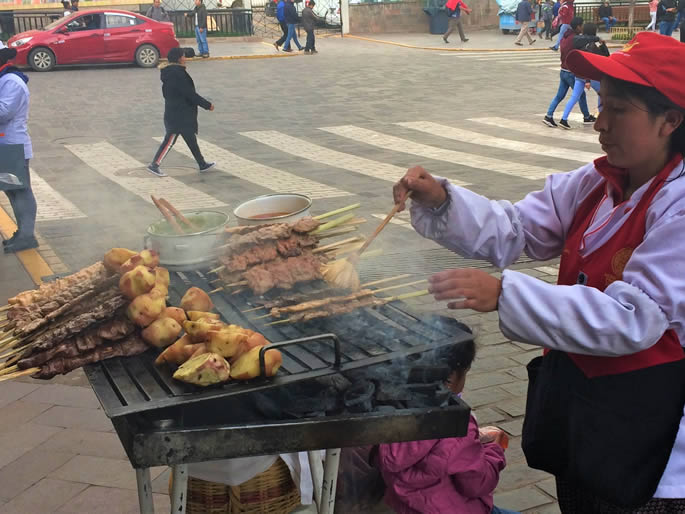 In the morning, while walking to your Spanish classes in Cusco at Calle San Agustin, downtown Cusco, you can find many stands selling avocado sandwiches. You can have your sandwich with onion, cheese, or even the spicy rocoto if you are brave!

In the mornings during the weekdays, usually at the same stand that sells avocado sandwiches, you can find numerous stands selling juice. These stands offer quinoa juice or apple quinoa juice. The texture is thick, and the temperature is warm. Both apple and regular quinoa juice are equally tasty; you should try both and decide which is your favourite.

You can buy delicious ‘rocoto relleno’ from street vendors in Peru for as little as US$ 0,50. The fried chilli pepper is stuffed with cooked peas, carrots, and meat. Rocoto relleno comes with 4 to 5 potatoes. Eat the two together for a pleasant combination. Rocoto relleno is normally sold in the afternoon as a lunch snack. 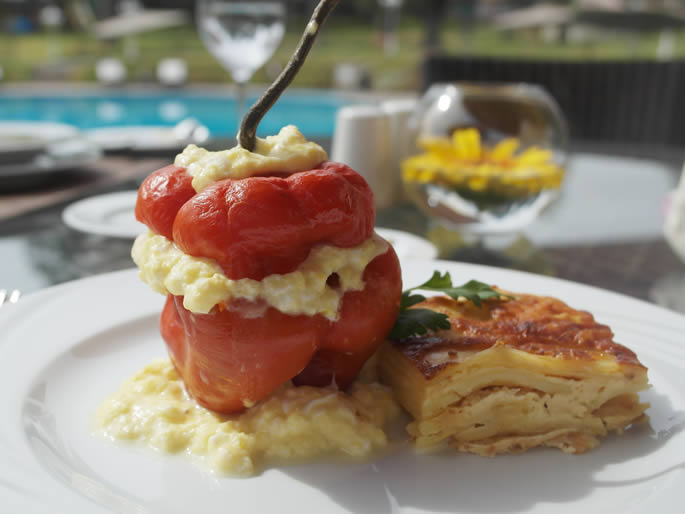 Tamales are sold on the street for about half an American dollar. They are served either salty or sweet. Unlike Rocoto relleno, palta and bread, and the juices who have a set time frame for service, tamales are served in the mornings and the evenings. You will find several vendors on the streets of both Lima and Cusco.

Choclo is Peruvian corn grown only in the Andes region. The kernels are at least three times larger than the typical corn from the United States and Europe. The taste is a bit starchier and nuttier, compared to the smaller, more sweet corn. You can buy a choclo for US $ 0,75. You can get it with cheese for an extra 20 cents. The best time to eat choclo is in January, February and March because of the rain season in Peru. 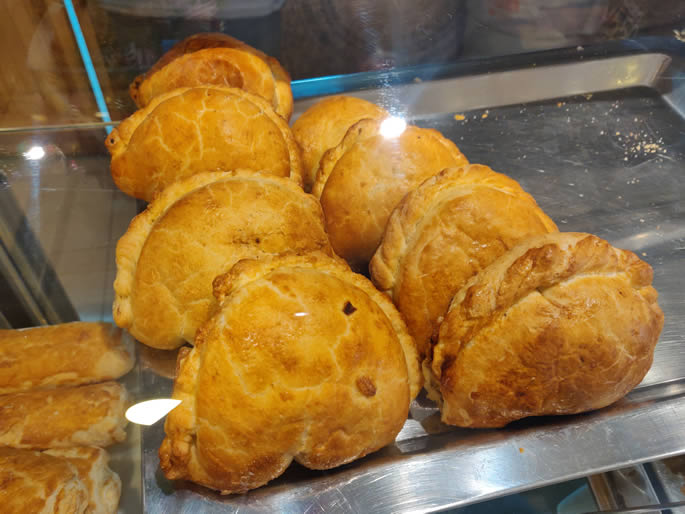 You can find empanadas sold on the street for a bit less than an American dollar. You can also buy them in stores such as Povea for a bit more. They come in flavors such as cheese, ham, chicken, meat or mixed. Ask for them heated for extra taste!

Cassava frita, also known as yucca chips are very popular among Brazilians. Brazillians love to enjoy them with a cold beer. Fun fact: The same root used to make Cassava frita (yucca) is also used to make the bubbles in bubble tea. 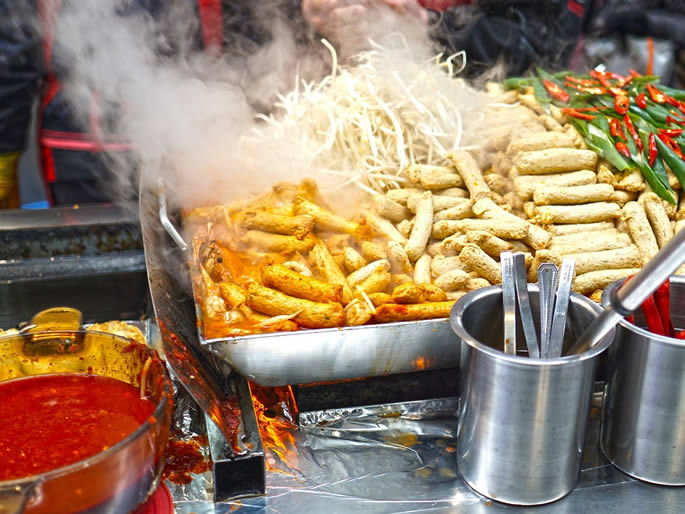 Bolinhos de Bacalhua translated into English are named cakes of cod. This snack is everywhere in Brazil. Brazil’s obsession with cod derives from its Portuguese ancestors. Bolinhos de Bacalhua is crispy on the outside with a soft mix of salted potato and cod on the inside, and normally served with lime.

Kibe
Brazil adopted this dish from the Levantine that immigrated in the late 19th century. Brazilians use minced meat, bulgar wheat, and minced onions. Seasoned with garlic and mint and served with lime wedges and tahini sauce to dip. They are sometimes eaten raw, in which case they are called kibe cu.

In Argentina, Choripán is also known as the “Chori”. The sausage contains 70% beef and 30% pork. It is served with a special sauce known as chimichurri sauce. Near the airport Jorge Newberry in Buenos Aires, on Costanera Sur, is a favourite spot to buy Chori’s. Ask your Spanish teachers! 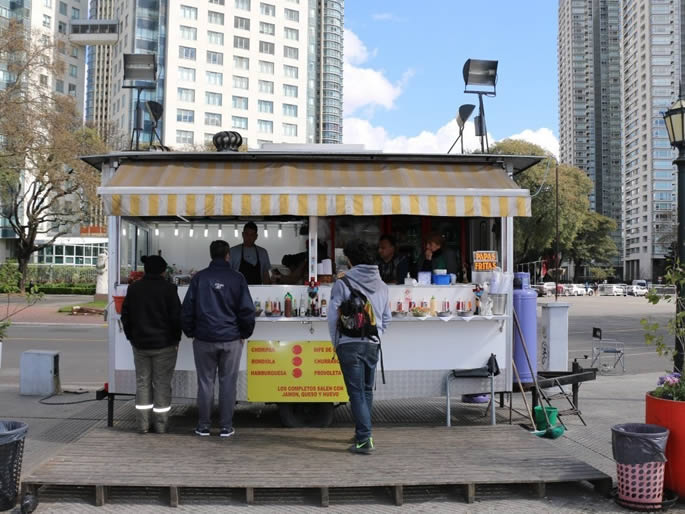 Lomito is a steak sandwich that is made from famous Argentine beef. The beef is what makes the sandwich so delicious! The sandwich includes tomatoes, onions, chimichurri, mayonnaise, lettuce, fried egg and ham.

Tip for our Spanish students in Buenos Aires: You can find plenty of these on Av. Dr. Tristán Achával Rodríguez, near Puerto Madero.

Sandwiches de Miga are another popular snack in Argentina. They are made with a type of bread that cannot be found in countries such as the U.S. The bread is thin, light, and white. The sandwiches are made with eggs, olives and ham, mayonnaise, or tuna.

Arepas are debatably Colombians most popular street food. Simple, yet its flavour makes anyone an instant addict. Arepas are sold in commercial areas; however, the most delicious tend to be sold in the street. Arepas are deep-fried corn dough. There are many different kinds of arepas depending on the area.

If you are studying Spanish in Medellín, you will see arepas made with cheese and topped with condensed milk. In the highlands they serve arepas de chóclo, which are broiled with butter and served with a topping of cheese. Our Spanish students in Cartagena can try the local specialty “arepas de huevos” (egg). 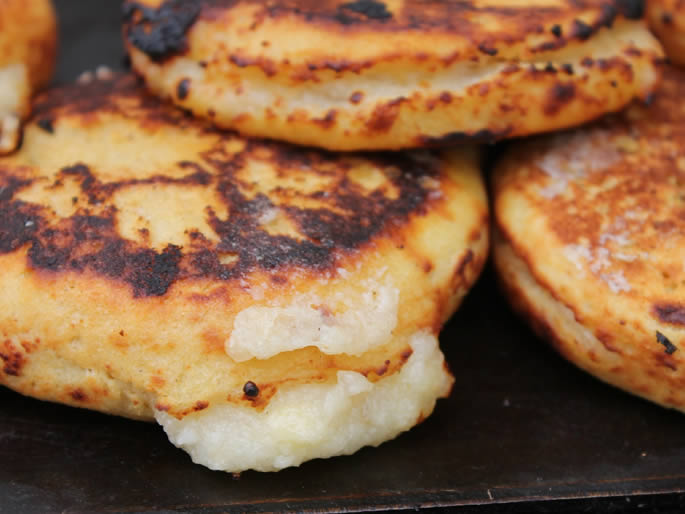 About the size of a golfball, Buñuelos are delightful, deep fried cheeseballs. Made from salty dough and curdled cheese, they are particularly prominent during Christmastime. Sometimes served with chocolate or arequipe (a Columbian twist on dulce de leche). This typical Colombian street food is best served hot.

Have you ever had a desire to consume a ginormous, leaf-cutter ant? Colombia provides the perfect opportunity! Colombia serves roasted and salted Hormegas Culoñas. They are eaten as a snack or breakfast side. They can be bought in jars or paper bags. They are popular in Barichara, in the Norte de Santander province.

The most important advice when trying street food in Latin America is this: eat street food where there are plenty of other customers. This is how to tell if a place is credible. Additionally, make sure you take a peek at the ingredients, salsas, and condiments. If they do not look fresh and clean, trust your instincts. Use your sense of smell as well. If it smells good, it probably is.

Street food in Latin America is not only a delicious option while you are travelling and learning Spanish; street food is a very affordable option as well. The best Latin American street food and snacks vary vastly from country to country. Each country has a completely different menu. Find the country of your choice for your travels or Spanish classes and see what and why this country produces this type of street food. The teachers at school will tell you more as well as the local street vendors, a great way to practice your Spanish!

Because that’s what’s most interesting about local cuisine which – obviously – includes street food: street food will reveal the countries dynamic. Brazil, for example, has lots of adopted street food from immigrants. With some caution, street food is one of the most exciting, appetizing way to appreciate Latin American culture.  Now that you have learnt about the  Best Latin American Streetfood and snacks, keep exploring and let us know! Provecho!